I am one of those Stephen King fans that became completely immersed in the Dark Tower series which is one of my favorite book series of all time.  The fact that Stephen King managed to tie in nearly every book he had ever written into the Dark Tower as his kind of “universe” all his other novels center around or touch in some way was even more impressive to me. 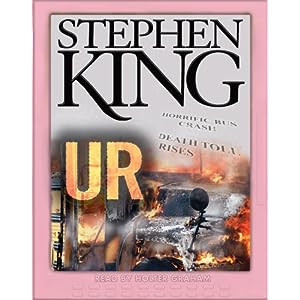 When I borrowed the Stephen King UR Audio Book from the library I was pleased for its relatively short form (2 discs / 37 tracks).  My time for books and audio books has waned as of late due to my lack of being on the road, so I was glad I was able to get through a whole audio book on my recent trip out of town.

The book was written for and is about the Amazon Kindle, one that is shipped to Wesley Smith a man who recently broke up with his girlfriend over the fact that he spends too many times reading paper books and not listening to his girlfriend enough.

He realizes there is something amiss about his Amazon Kindle when the color is not the plain white and he sees a new UR beta function that he learns shows books, news articles and glimpses into other alternate realities and later the future.

Stephen King is a master of description and sets up the first third of the book describing all the characters, story, mentality.  His overt attention to every detail in a room, scene or character is one of the styles that draws me to his books every time.

It had similarities to so many other stories of course just subbing out the devices used to predict or see glimpses of the future, but still when the main characters of the story see a tragedy about to happen and seek to prevent it you get some unusual twists with some serious Dark Tower references in toward the end.

I found UR to be an engaging fictional Audio Book and it is a must read or listen to if you are a Stephen King fan.  It is not a horror book if you are concerned, and there are no horror elements at all.