I know enough about SEO from working with blogs the last 8 years to know how to SEO optimize articles with keywords, header text, appropriate internal and external linking, catchy titles, using similar words and search queries in the article…etc to where one would think I have a better capture on what articles would garner more traffic than others and sometimes I can see something super popular become a trend and my site show examples of that.  One example was when Mitra covered the alternate ending in Undertale and this post traffic exploded when Undertale popularity was skyrocketing.  But there are a few topics and products that I just couldn’t expect to have so much of a trend.

One example is the Veryfit 2 smartband which I got to review from Gearbest, this article consistently has been generating 8000-10000 pageviews on this one article for the past several months, and I have over 4,000 published articles on dragonblogger.com 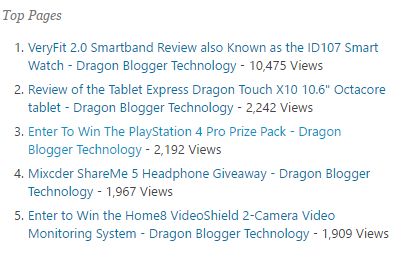 The second closest article is the review of the Dragon Touch X10 Tablet which Iggy did many months ago and used to have more, but it is a distant 2nd compared to the first article.  Of course the 3rd was the recent PlayStation 4 Pro Giveaway which is expected, large giveaway articles always get a lot of traffic.

The odd thing is the Veryfit 2 is a very inexpensive fitband and a product/brand name that is so relatively unknown that I would never have expected it to become such a largely searched for item.

On my YouTube Channel, a $20 gaming headset called the Kotion Each G2000 has over 123,000 video views and the most views out of any video on my channel which has over 2100 published videos.  Again this is a relatively low budget headset from a brand I wouldn’t think was well known and I can’t replicate the success of these videos and posts for other products to get similar traffic numbers.

It is so very hit and miss which products will become “hits” where many people get that product and search for issues or problems or information about that product and because it was a lesser known or cheap item, the bigger sites likely wouldn’t cover that product so I get a top spot for searches about that product. I have yet to replicate this level of success with some of the bigger brand products we review, though we get into the tens of thousands of video reviews on some popular items like video cards, PC cases and other accessories.

So being a tech blogger for 8 years, you would think I would be able to magically optimize every product review or unboxing to be popular, yet it is still a mystery what videos and written reviews will be a hit or miss and I still get completely surprised when some odd product that I didn’t even consider would be popular becomes one of the most popular posts.

How many of my fellow bloggers out there have similar examples where something unexpected became viral or popular and you were left scratching you head how and what you could do to attempt to reproduce that success?