So it took about two months but Google finally reversed their manual penalty on JustinGermino.com and DragonBlogger.com after I finally not only removed what they found was the penalty (they never officially told me anything other than the generic “OUTBOUND LINKS DETECTED” but also I think my explanation in the reconsideration request was the final deciding factor which helped them choose to remove the penalty, this is because it took 2 reconsideration requests and the first one went with them choosing to keep the penalty and not remove it even after I didn’t do anything different other than word my reconsideration request differently the second time I submitted it. 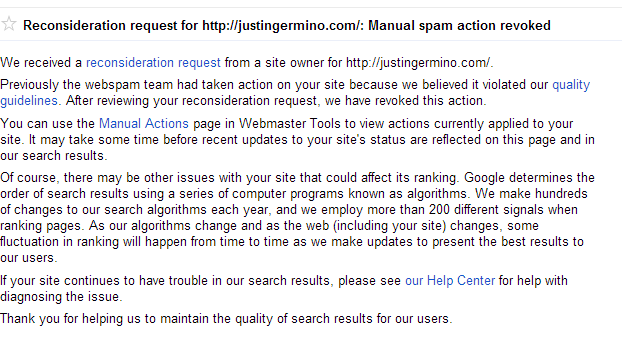 So I knew I was penalized for hosting external dofollow links not because I was doing it with any attempt to manipulate PageRank, but because I was hosting guest articles from sites like MyBlogGuest and Post Runner as well as some others.  As a result of the penalty to MyBlogGuest just about every site hosting articles or who had been a part of that network was penalized it would seem and I went about removing hundreds of guest posts from my blogs as well as implementing a nofollow plugin which made all links on all posts nofollow.  This combined with some soak for Google bots to pick up the changes, I filed my first reconsideration request only for Google to say that my site still didn’t meet guidelines.

So I filed another reconsideration request, this time asking for specifics and telling them everything I did to try and become compliant, I explained that I did host articles from MyBlogGuest but now all links are nofollow and articles of lower quality have been deleted.  I also pleaded that they link and explain which parts of my site were not compliant so that I may quickly correct the issue.

Has anyone else been successful in getting their PageRank restored yet after a manual action?