I used to be a big fan of Gamma World back in the early 1990’s and role played with my brother and friends for countless hours in the post apocalyptic wastelands of future America.

Some of my fondest memories involved a party of adventures mostly made up of pure strain humans investigating a crashed ship wreckage only to find mutated sentient chickens attacking the local community.

Some of the mutation powers you could get as a character were quite incredible and probably the best factor of the game was that it was much more liberal in terms of what you can or can’t do rather than being as rigid as the Dungeons and Dragons system at the time.

There is something about the Post Apocalyptic genre that makes it incredibly fun to role play and there is a reason Fallout 3 and other games in the same genre are popular.  Role playing in a genre where you are gritty human or hybrid human or animal mutations with modern weaponry and personalities fighting against famine, disease and the chaos of a world going to hell is inviting.  There are fewer lawful good heroes and far more flawed heroes which made it seem all the more real.

So when I saw that there is a new Gamma World based on 4th Edition Dungeons and Dragons rules, except it is a self contained rule set I was intrigued enough to read all about it.  This would be the ideal gaming setup and scenario for older teenagers and adults, but alas my kids are a little too young for a post apocalyptic setting and all the grittiness that comes with it. 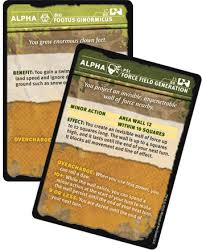 Gamma World 4th Edition looks like it has some great rules and the fact that it uses some cards for randomness in characters and abilities looks like an even bigger plus.  At its price it is 1/3th the cost of a total Dungeons and Dragons 4th Edition setup and is a fully inclusive boxed set for those who are tired of Elves, Dwarves and Orcs and want to role play in a world more like Fallout or The Book of Eli.