I have always told my readers that my favorite novel series of all time is Stephen King’s Dark Tower which combines a Western genre with a post apocalyptic setting.  The Dark Tower has all the elements of Sci-Fi, Fantasy, Western, Horror mixed in as well.  It is so expansive and Stephen King himself has mentioned that it is the framework for every one of his works and each novel he has written in some way has a piece in The Dark Tower. 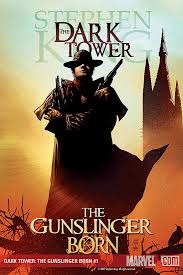 So I read on Dark Tower Movies about the upcoming film and TV Series and how Ron Howard was on the Howard Stern show talking about the movies…yes Ron Howard will be the director of the epic Dark Tower series.  There will also be a trilogy of films with a TV Mini Series planned by NBC Universal that will take place in the setting between the first and second movies.

I read talks that Javier Bardem and Viggo Mortensen were choice roles for Roland in the films but don’t know which actor will be slated to play the most gritty gunslinger I have ever read about.

If you are a fan of the Dark Tower Series and want to follow on the latest news, then join DarkTowerMovies.com as they seem to bring the latest information on The Dark Tower.