Was testing out the new WordPress iOS application over the past few days, and it has a much more minimalist feel to it, in a good way but it took some getting used to. First I didn’t realize they moved post options to the very bottom of your article, and you can’t see them until you scroll down.

This made it hard for me to find where I could schedule my posts instead of letting them publish immediately, I wish they put this option up near the save/update/publish button instead so it was always in plain view. The featured image support is a really nice touch, it will let you pick or take a photo off of iOS and set it as your featured image.

Overall though typing blog posts on the newer version of the WordPress application is faster than previous but adding tags, and doing some scheduling is still a bit of an extra step. I think having access to the italics, bold, underline, strike through and quote buttons as well as the read more right at the bottom is a plus however. 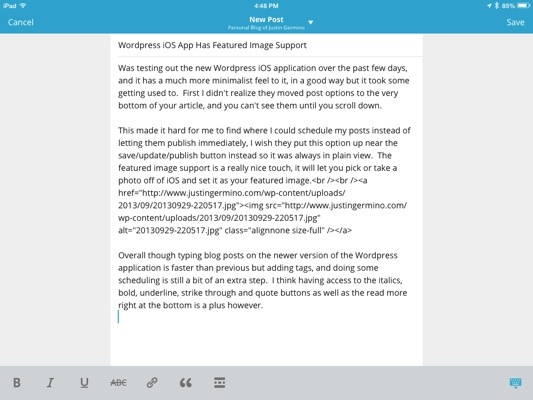