I had a great weekend playing traditional Dungeons and Dragons 3.5 Edition with my boys a few days ago.  Now that Oliver is 7 years old he can read and write and do much of the hit point addition/subtraction during combat himself and he loves having a dry erase board and drawing the number of opponents, locations of where everybody is at so I let him be the one to chart out the combat on a white board as it helps keep him more engaged.

I dug out my old excel generators that I created back in 2001/2001 which were so incredibly clever and complex, one was my gem generator.  Rather than have generic gems, I created a generator that calculated the type of stone, carrot weight, cut type or uncut and value using several tables from the Dragon magazines and Dungeon Master materials and this wound up to be a very easy way to instantly create many many gems for treasure hoards. 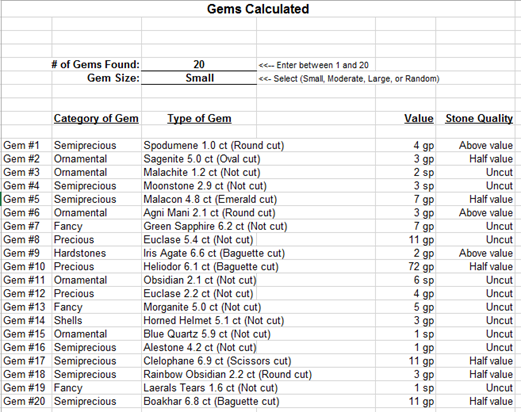 This was one of my many tools, I had so many and wanted to create an actual iOS or Android application that can leverage these tools, it may be something I look into as a Dungeon Masters companion, the key would be make the tools and generators compatible with any game system, not anything specific to D&D 3.5 rules, so it could work with just about anything.

This may be a project I pursue in the near future for fun.