This gives new meaning to the joke parents tell kids like "don’t swallow watermelon seeds or you will grow a watermelon in your stomach".

A man named Ron Sveden had been coughing for months with lung problems and doctors were unable to find the issue.  Being elderly the man assumed he was developing lung cancer, and it was when one of his lungs collapsed that doctors made an unusual discovery. 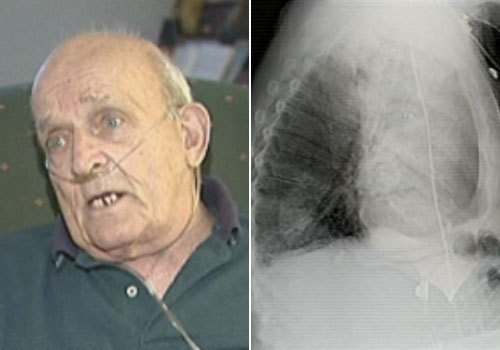 A pea plant had started growing inside the mans lung and actually grew to be 1 1/2 inches long causing the lung to collapse.  The man who eats peas on a regular basis recalled possibly inhaling a pea down the wrong pipe in previous months while eating dinner.

The pea travelled down his windpipe and settled into his lung where it started growing roots and establishing itself.  Apparently a live human lung provides enough moisture and oxygen for a plant to get established.

This article was picked up by every major news outlet including the NY Post.

So watch out when eating your food, and when you choke and food goes down the wrong pipe, there is a slim chance it could just take root in your lung!