Despite the fears and concerns growing about genetically modified food including vegetables, fish, meat and every other consumable material that is sold in grocery stores and restaurants we continue to see more modified food hit our stores and tables. 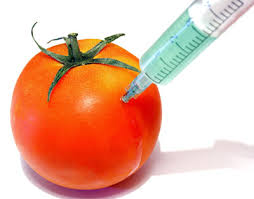 The simple fact is that humanity is facing a problem of epic proportion which is that food sources currently taken for granted cannot be sustained in the decades to come.  The human population is expected to reach 9 billion people by 2050 and there simply will not be enough land to raise enough cattle to supply meat, there won’t be enough fish in the ocean left to catch to use as feed.  Even planting and farming is not sustainable without doing something drastic like multi-leveled agriculture where literally you build farms vertically stacking them on top of each other into the sky rather than spread out on a flat horizontal field.

Genetic modification of food is a necessity not an option in order to make sure we can grow plants, fish and other food sources that are faster, more resistant to pests and illness and require less resources.  It is genetic modification of corn, wheat and rice that will end world hunger some day.

It is true that planted food (including farming) wastes less resources and takes up less "space" than raising livestock.  Human beings however are omnivores by genetic design, I don’t think you can exist from baby to adulthood without having some degree of meat in your diet.  Though I think fish will suffice and you don’t have to have beef, pork or chicken.

Companies are trying out genetic modification of foods as quickly as they can figure out the methods because they are trying to one up each other in solving these needs and problems.  I think the science is being applied without safety guidelines or even appropriate tests developed to ensure that there are no harmful side effects.  There just simply isn’t enough funding put into the FDA and not enough independent testing to ensure all of the food hitting the market is safe anymore.  The fact that it takes decades of consuming or drinking food to show "trends" in the masses that may indicate problems makes it even more difficult to rule out what shouldn’t be eaten.

It doesn’t take much to realize that people are wrong too, I mean when I was a kid all I read about was how unhealthy eggs were for you.  My parents would hardly ever let my brother and I eat eggs for breakfast, we were told to eat cereal (ironically we had Lucky Charms, Fruit Loops, Life, and other cereals occasionally) and this was thought to be healthier than eggs cooked on a pan.  Now decades later there are studies showing that eggs are good for you, that the cholesterol in eggs does not translate to higher cholesterol in people and that eggs contain good fat and quality protein.

Like it or not, modified food is a necessity for the future but how can the proper measures be put in place to ensure it is safe and doesn’t cause tremendous health risks later on?