For Christmas my kids received the Lego Minotaurus game from Santa and the game is quite fun and creative for the whole family. 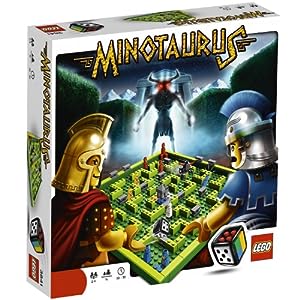 Minotaurus like the other Lego board game is a bit different from traditional board games in that you “build” the game board before you play the game.  This involves both putting the blocks together based on the default instructions or being creative and making your own mazes and labyrinths that players have to navigate in their attempt to avoid being captured by the Mintoaur.

My four year old and seven year old both enjoyed playing Minotaurus and the objective is to take turns rolling dice and moving your man a number of spaces toward the end goal which is in the center of the maze.  To add challenge there are several additional colored “blocks” you can add into the dice. 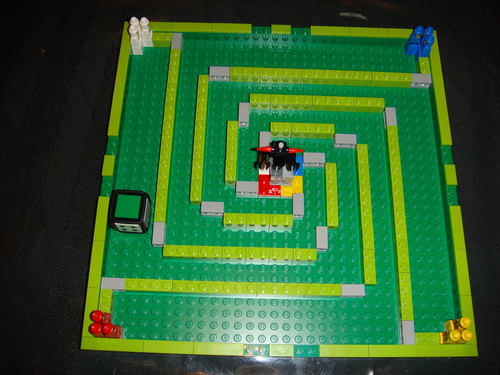 When you roll the gray side you pick and place a blocking wall on the game board instead of moving your unit.  This can be used to block off other players from reaching the goal or blocking the Minotaur from getting access to your own men

If a player rolls the black side they move the minotaur a default of 8 spaces (12 if playing a more aggressive version of the game) instead of moving their own man.  They can control the Minotaur and move it to capture opponents men or make it more perilous to move through a specific certain of the maze.

This is a special option rule that allows units to jump green walls if rolled, it works kind of like the walls being “hedges” instead of actual walls and can make for interesting results when a person can evade capture by jumping a wall to escape.

Overall Minotaurus is a fun and engaging game which makes for a great family game night if you have younger kids.  The fact that you can change up the layout of the board allows you to cater the game to any level.  You can for instance make the maze longer and harder for the adult player sections and easier for the youngest kids.

Lego makes some quality board games and I think it is important to have some family activities unplugged from the computer where the family can sit around a table or floor together and just talk as a family while they play an entertaining board game.  I know this game is coming to us when we go to a cabin with the family for a summer vacation.  At  around $23.00 Minotaurus is a game that provides hours of entertainment and well worth the price.